June 15, 2001 – Since early 1998 an eclectic and lively group of independent-minded professionals have met every other week or so to share a bowl of noodles, usually at the Noodle House in Seattle’s Fremont neighborhood. And now this . . .

I started the Fremont Noodle House Group while I was doing some home-based consulting. At first the group consisted of me and a few other work-at-home professionals who just wanted to get out of the house once in a while. We were soon joined by a variety of folks, even some who held regular jobs. Today the group includes entrepreneurs, unemployed dot-com-ers, consultants, massage therapists, architects, designers, musicians, film and video producers, world travelers, journalists, authors, professional speakers, playwrights, and even a bona fide “independent facilitator.”

Our last meeting at the Noodle House was held June 8, 2001. This page documents our final meeting at our original location.

Our gracious and capable host at the Noodle House has been Rishi. Even when he’s nursing a hangover and pondering the loss of his job, Rishi makes you feel right at home. And even when there are more than a dozen of us at the table he takes our orders (and accurately delivers them) without writing them down. By a strange coincidence, Rishi and I had met each other long before I began noodling. About ten years ago, when he was a fresh-faced student and I was a cranky textbook sales rep, he and I met on a city bus (the #13, which by another coincidence would become the menu number of my favorite Noodle House dish) going to Queen Anne, where we both lived at the time. We had both forgotten the encounter until some unknown event triggered my memory of it about a year into our Noodle House visits. I asked him about it, and we pieced together our earlier meeting. This, by the way, is just one of many small-world stories that have unfolded over noodles (the best one being Rahul’s encounter in Patagonia, but that’s another story . . .)

There’s usually at least one new face at the table. This time there were three. Maria (left) stumbled upon us while hanging around the Noodle House working on her latest play. Claude (center) came with long-time member Page. Amy (right) has been on the e-mail invitation list for more than a year but hadn’t actually attended before.

For whatever reason, the Noodle House Group includes a bunch of guys with beards. That’s me on the left, Lyle in the middle, and Griggs on the right. We also happen to be neighbors and, along with Tim, Raven, Rahul, Liesbeth, and Peggy (none of whom have beards), among the longest-tenured noodlers.

A bunch of regular noodlers were also in attendance. We didn’t get pictures of all of them, but this is a nice representative sampling. Eric (at left) used to be a respectable journalist until he fell in with us [and he wrote a column about us for the Everett Herald]. Jean (left center) is one of my oldest friends in Seattle but a fairly recent addition to the noodle realm. Page (right center) runs his own marine-safety-gadget company. Erin (right) is a massage therapist whose clientele includes a number of local celebrities and prominent business people.

My regular dish was the #13, “Kanom Jeen – Chinese noodles in a spicy green curry, with thai eggplant and sliced chicken breast.” To the shock and amazement of Rishi and the Noodle House kitchen staff, I had Pahd Thai instead of #13 at our third anniversary meeting last winter.

John, the proprietor of the Noodle House, went to a lot of trouble to decorate the already-beautiful, high-ceilinged space. This is one of a pair of ceremonial Indonesian horses that hung from the ceiling.

The giant hole in the foreground is where the building that housed the Red Door and The Dubliner used to stand. That’s it in the background, the little building receding into the distance. Here are a few news stories about the building’s move.

While we’ll never again enjoy noodles in the original space, there is a good chance that the Noodle House will be revived, perhaps within a few months at a temporary location in Ballard [this did indeed happen, and we met for a couple of years at Thaiku]. And a year or so from now, there’s a good chance that they will re-open in the new building that rises at its old location [John passed on this opportunity, due to his success with Thaiku in Ballard and to the proliferation of Thai restaurants in Fremont].

By the way, I never have been completely clear on the actual official name of my favorite restaurant. The sign above the door simply said “Noodles.” Their sign announcing the closure said, “Noodle House.” Their menu and phone book entry said “Fremont Noodle House.” In any event, regardless of their fate, the name will live on with the Fremont Noodle House Group. 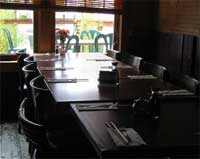 This is the table where we have met for the past three and a half years. I hope John and Rishi have stashed it in a warehouse someplace (hey, guys, if you need a place to store it, just let me know) to be reinstalled wherever the Noodle House ends up.

Many thanks to Lyle for the photos on this page.

Scared Sitless, my office fitness book, is available now at Amazon, or ask your local bookstore to order it from Ingram.