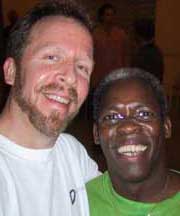 Here I am with one of my favorite drum teachers, Mamady Keita.

Mamady is originally from Guinea, in West Africa. He left Balandugu, the village he was born and raised in, as a young man to join Ballet Djoliba, Guinea’s traveling national drum and dance troupe. He has traveled all over the world sharing his djembe virtuosity as a performer and teacher. He now lives in Brussels and San Diego and spends much of each year on the road teaching djembe and dunun drumming.

The highlight of my musical education to this point was attending a workshop with Mamady in Conakry in January-February 2002. We got three solid weeks of rigorous (but very fun) djembe and dunun education, plus almost-nightly performances by griots/griottes, local ballets, and authentic traditional groups from nearby villages.

This was my first trip to Africa, so it was a real eye-opener. The stark reality of daily urban life in a very undeveloped Third World country was pretty jarring – open sewage ditches, smoldering rag piles, car-swallowing potholes, a three-year-old kid playing with a knife next to a huge pot of fish heads boiling in oil over an open fire, a guy welding the bumper of a gasoline truck with a cigarette dangling out of his mouth – but there was also something very refreshing about seeing a big city where not every single surface was covered in asphalt and where a high percentage of the population is genuinely friendly, open, and curious.

I’ll never forget the experience of watching a French-dubbed American techno-action thriller (“Ennemi d’État”/”Enemy of the State”) in a giant air-conditioned theater with my friend Ansoumane and then walking home, trying to dodge those giant potholes in pitch-black darkness (forgot my flashlight). I spoke only about three words of French at the time, so I couldn’t even ask Ansoumane how many of the movie’s high-tech surveillance gadgets he understood (Est-ce que tu comprends le “digital sensor in Will Smith’s belt”?).

There are a lot of things to like about Mamady – he is a creative, eclectic musician and composer and a really nice human being – but I am most impressed with his ability to span the gap between traditional West African music culture and Western drumming students.

Most of the African teachers I have studied with seem either baffled by or annoyed with linear-minded, transcript-writing, foot-tapping European and American drum students who are constantly asking “Where’s the one?” (By the way, I’ve discovered a more effective question, “What are the dancers doing?”) This makes a lot of sense. It is, after all, African music, so why not study it like an African?

Mamady is the only teacher I’ve met who has both the authority of a top-flight traditional African music background and the ability to engage even brand-new Western students in the music. I’ve seen him teach introductory djembe classes with as many as 60 students, and it’s amazing how he can make everyone in the room feel like he is giving them a private lesson. He’s got laser-focused hearing that permits him to hear each individual djembe and give individual feedback to anyone in the class.

While I’m not convinced that he’s a huge fan of it, Mamady is at least open to the idea of sharing his rhythms in notation that Western music students can read. His book “A Life for the Djembe” uses a notation system that is very accessible to Americans and Europeans, sort of a cross between box notation and traditional musical notation.

Book a 25-minute chat at Calendly.